How A New Cheese Factory Can Transform The Landscape Around It

The population of Northern Colorado is booming. People are flocking to the area and population numbers are on the rise.

The same thing is happening with dairy cows.

Weld and Larimer counties already sport high numbers of beef and dairy cattle, buttressed by the region’s feeding operations. But an expansion of a cheese factory owned by dairy giant Leprino Foods will require even more cows to churn out the milk needed to produce bricks of mozzarella cheese and whey protein powder.

When a big food company builds a factory, it doesn’t just bring in new industry. Farmers change what they grow, expand their herds and buy new land. A new meatpacking plant or dairy company, like Leprino’s expansion, can quite literally change the landscape around it.

Leprino’s cheese is ubiquitous, on everything from Papa John’s pizza to frozen dinners. The whey it extracts and processes can be found on shelves in nutrition stores. The privately-held company, based in Denver, is the largest mozzarella manufacturer in the world. You’ve likely eaten their cheese without knowing it since they sell their cheese wholesale to other brands.

“There’s a good chance that if you go buy a bag of shredded mozzarella in the grocery store that it’s our cheese,” says Leprino executive Mike Reidy.

To make those products they need a ton of milk. Already, their Greeley, Colorado plant, which started operations in 2011, takes in more than 5 million pounds of milk a day. Now, it’s about to expand. To do that, the company needs a lot more cows nearby.

“Generally the number we’ve been sharing with folks is about an incremental 30,000 cows,” Reidy says. “It’s a lot.”

Casey DeHaan is one of the dairy farmers beefing up operations in response. His farm near Ault, Colorado, looks pretty standard from the county road it sits on. There’s a big red barn and a few pens full of cows. 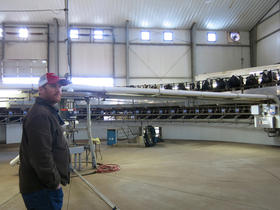 DeHaan has been up and running here for eight years, after moving to Colorado from his home state of California.

“We went from 3,000 cows to 4,000 cows, and at that time Leprino was wanting more milk as well,” DeHaan says. “Ultimately, we’re shipping more milk down the road to the plant.”

Leprino’s Greeley facility takes in nearly all the milk DeHaan’s 4,000 cows churn out, plus the milk produced at his brother’s farm outside Fort Lupton and much of the milk his neighboring dairy farmers produce. If you’re a large-scale dairy farmer in Northern Colorado’s Weld, Larimer or Morgan counties there’s a good chance that you’re shipping your milk to Leprino.

Leprino’s new factory has turned this once relatively modest dairy region into a growing milk production hub. In less than 20 years, from 1997 to 2015, the number of dairy cows in Larimer, Morgan and Weld more than doubled.

Tom Haren, CEO of Ag Professionals, a consulting group in Northern Colorado that helps farmers expand their operations, helped make that growth happen. In the mid-2000s, his team worked with Dairy Farmers of America, the co-op that purchases milk for Leprino, to assess the area’s potential to be a thriving “milkshed,” a place capable of churning out vast volumes of milk.

When a company is thinking about an expansion, they ask a series of questions, Haren says.

In Northern Colorado, Haren says, the answers were mostly positive.

Most new dairies in Colorado are popping up within an 80-mile-radius of the expanding Leprino plant, Haren says. Because milk can spoil quickly and shipping it in big refrigerated trucks is expensive, dairy farmers want to be close to the companies who are buying their milk and the people in cities who drink it. 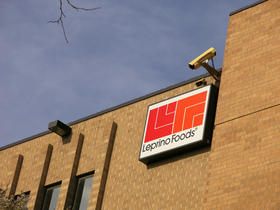 “We’re dealing in agriculture, particularly with milk, with a perishable commodity,” Haren says. “How long can you sit on it before it becomes something unusable?”

In many ways, our food system is regional. Big cattle feedlots stake a claim near companies that produce hamburger meat, and large hog barns near bacon factories. Across the rural areas that produce food crops, you’ll find farms clustered around the factories that process their products and processors moving close to their suppliers.

The changes in industry, however, don’t come without costs.

The growing dairy region of Colorado is also seeing dramatic population growth. Water is limited. Many of the new and expanding dairies are finding themselves positioned near or within suburban communities.

Casey DeHaan can see some of those rapidly growing neighborhoods from his dairy farm. When he was designing his operation he tried hard to cut down on odors from manure and muddy pens. He has to if he wants to expand to meet Leprino’s thirst for milk.

“Eight million pounds of milk a day? They’re knocking on the door now wanting to get to that point,” DeHaan says. “I think the Colorado dairymen will do everything they can to help make that happen for them.”

Why Do Cows Moo? Here Are A Few Reasons

We all learned it as kids: Old MacDonald has a farm and on that farm he has a cow that says “moo.” But why? Why do cows moo?

Whenever I’m out reporting in the field I can tell many ranchers have a powerful connection with their cattle – they can almost understand them. But researchers today are trying to figure out exactly what cows are saying.

I drove out to the beef research farm at the University of Missouri Columbia to meet cattle geneticist Jared Decker and ask him: What’s in a moo?

Beef Prices Down As Summer Grilling Heats Up

Expansion in the country’s beef cattle herd is bringing cheaper meat prices to the grocery store just in time for the summer grilling season, but those reduced prices might get some scrutiny on Capitol Hill.

A guy who covers agriculture in the West who’s never put a skinned, sliced, battered, deep-fried bull testicle into a cup of cocktail sauce and then into his mouth? I couldn’t let it stand.

They’re known by many names: lamb fries, bull fries, Montana tenders, huevos de toro, cowboy caviar. In my corner of Colorado, they’re Rocky Mountain oysters and I somehow coaxed myself into thinking I needed to try them to be more a part of the place I live, to be a true blue Coloradan.